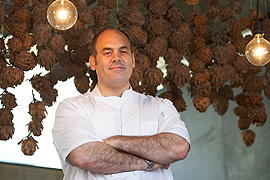 Paul is now developing his brand as a restaurant reviewer & culinary ambassador for Tourism Victoria all over the world!
Known for taking classic ideas & exotic food cultures turning them into contemporary dishes, his cooking style spans the globe. Paul is regarded as Australia’s prominent expert on Latin food cultures his latest ventures the Newmarket Hotel & Acland St Cantina are some of the most popular & celebrated restaurants in Australia.
Paul was the culinary founder of the MPG restaurant group, whilst still being hands on passionate chef & food ambassador Melbourne & Australia. His venues included- Prince of Wales Hotel, Circa Bar & Restaurant, Acland St Cantina, Middle Park Hotel, Albert Park Hotel, Newmarket Hotel & Cellar Bar.

“When I arrived in Melbourne after a successful career in London my objective was to make a contribution to this world class city, not to follow or play it safe.”

“My mission is to keep the joys of eating accessible & informal but still creative whilst highlighting great produce, & inspiring talent amongst the team! “

It was a big year for Paul as his published his third cookbook Taqueria by Hardie Grant in December 2016.